As Diesel Costs Rise, So Does Demand for Alternative Fuels

According to recent reports, the cost of diesel fuel in the U.S. is expected to rise substantially over the next decade. To avoid these rising rates, many fleet managers around the country are replacing their diesel vehicles with alternative fuel models, like those that run on abundant, American-made propane autogas. However, for fleet managers who have not yet made the switch, there is now even more reason to consider alternative fuels.

The U.S. Environmental Protection Agency and the Department of Transportation’s National Highway Traffic Safety Administration are jointly proposing stricter diesel regulations that are going to drive the vehicle costs even higher. How much higher? Approximately $1,150 to $1,990 per vehicle higher in the first year (2021) and $1,770 to $1,990 per vehicle in years 2024-27.

To combat these fees, many transit agencies are making the move to clean-burning, cost-effective propane autogas. For example, Florida’s Lee County transit agency added 20 Ford E-450s equipped with ROUSH CleanTech propane autogas fuel systems to its fleet. The transit agency has seen such success, that it plans to replace the rest of its diesel-powered paratransit shuttles with propane-fueled models over the next five years.

With more than 45 percent of its paratransit fleet now operating on propane autogas, LeeTran is averaging $.50 per gallon of propane compared with about $1.50 per gallon for diesel. Aside from cost savings, the agency also expects to reduce nitrogen oxide emissions by more than 1.8 million pounds over the shuttles’ lifetime.

“We are converting our vehicles to operate on propane autogas for a number of reasons,” says Robert Southall, maintenance manager of LeeTran. “It’s an American-made fuel with significant environmental benefits; converting to propane infrastructure is more affordable; and propane autogas offers lower fuels prices.”

Propane autogas is a nontoxic, non-carcinogenic and non-corrosive fuel. The Environmental Protection Agency classifies the fuel as a non-contaminant. It is the leading alternative fuel in the United States and the third most commonly used vehicle fuel, following gasoline and diesel. About 25 million vehicles travel worldwide with propane in their fuel tank. 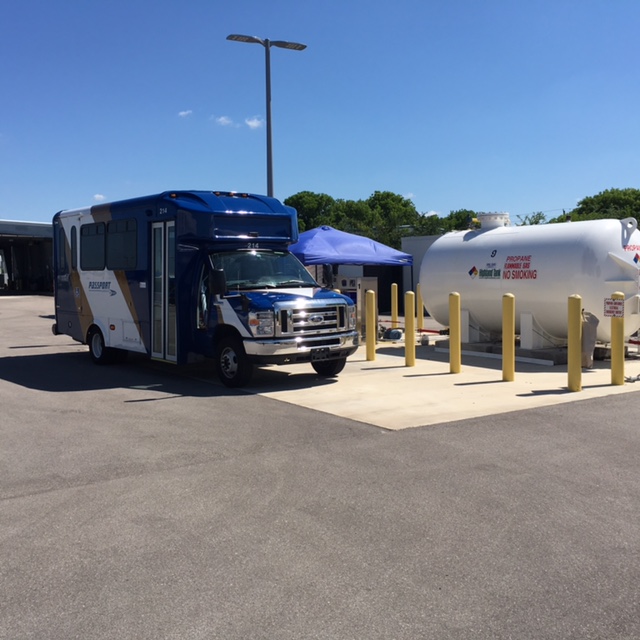 One of Florida’s Lee County Transit propane-powered Ford E-450s, parked next to their propane fueling station.