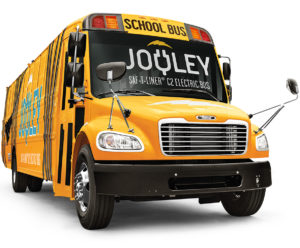 The yellow diesel-powered school bus has shuttled generations of kids to and from school. But now some school districts are trying out electric, battery-powered buses, and you may see them on roads in our region in the not-too-distant future.

There are thousands of school buses in Virginia, Maryland and D.C., and pretty much all of them run on diesel.

“Inhaling diesel exhaust can cause respiratory diseases and worsen existing conditions,” says Matt Casale, with the United States Public Interest Research Group, which recently published a report urging school districts to ditch diesel. While diesel technology has improved in recent years, with new buses emitting far less, Casale says the exhaust is still dangerous for children. Kids, he says, are especially vulnerable because their lungs are still developing, and because they breathe more air per pound of body weight than adults.

Diesel buses are also not great in terms of climate change (though they’re much better than cars — according to Arlington County, driving kids to school emits 10 times as much carbon dioxide as transporting them by bus). Casale says replacing all the diesel school buses in the nation with electric buses would be like taking more than a million cars off the road, in terms of greenhouse gas emissions.

One of the first electric school bus models available in the United States. Thomas’s Jouley will have a 100 mile range on a single charge.Thomas Buses

Fairfax County could be a leader in our region in terms of going electric. Jeff Platenberg is assistant superintendent of facilities and transportation for Fairfax County Public Schools. He says he still has some concerns about electric bus technology, especially regarding range and reliability.

“Reliability and range are two things that are pretty significant when it comes to safe student transport delivery,” Platenberg says.

Fairfax has one of the largest school bus fleets in the nation, with more buses than Metro has. They’re all diesel, but Platenberg says he’s considering electrics for his next purchase.

“Our vendors are telling us within the next 6 to 8 months, they should have something they think would fit our needs.”

Electric buses have gotten a lot cheaper in recent years, with a dramatic decline in the cost of batteries. This year, school bus manufacturer Blue Bird is rolling out its first electric model, Thomas is making one that will come out in 2019. They’re still more expensive up-front, compared to diesel buses. According to the U.S. PIRG report, electric buses cost about twice as much ($230,000 compared to $110,000, including charging infrastructure), but over the lifetime of the bus they can save as much as $31,000 on fuel and maintenance.