Natural Gas Vehicles for America (NGVAmerica) recently hosted the webinar “Maximizing Clean Transit Investment” for its members and the general public. The presentation included a comprehensive list of the advantages of compressed natural gas (CNG) vehicle use for government and corporate fleets. The webinar recording can be found on the Transit section of NGVAmerica’s website.

How does it work? According to the U.S. Department of Energy’s Alternative Fuels Data Center (AFDC), CNG vehicles are similar to gasoline engine vehicles in that they use an internal combustion chamber. A key difference is that CNG vehicles have a cylinder or tank containing CNG and a high-pressure regulator reduces pressure for the fuel injection system. The fuel is sent to the intake manifold or combustion chamber, mixed with air, compressed and then ignited by a spark plug. The image below, courtesy of the AFDC, shows the system’s layout. 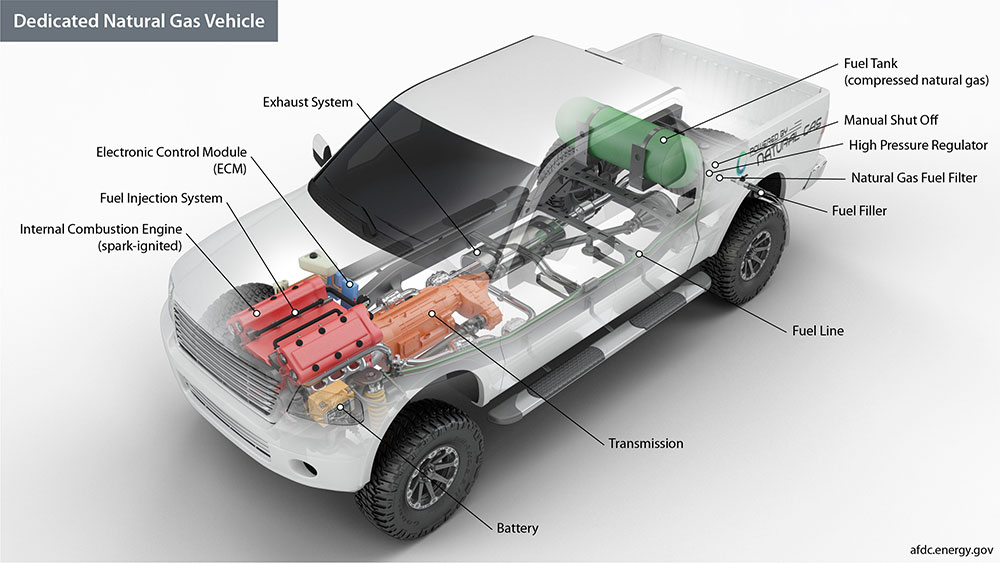 CNG vehicles can have several advantages over diesel engine vehicles. The most apparent advantage is that they produce much less harmful emissions than diesel engines. The emissions reduction offered by CNG vehicles is that of the criteria pollutant Oxides of Nitrogen; Oxides of Nitrogen commonly referred to as NOx. NOx refers to a group of diverse, highly reactive, and highly mobile emissions that contribute to a number of environmental issues such as acid rain, climate change, deteriorated water quality, ground-level ozone, air toxins, particulate matter, and lasting health impacts such as respiratory system damage. In NGVAmerica’s Foothill study, found that over a CNG transit bus’s lifetime it could reduce 94,800 lbs NOx compared to its diesel equivalent (assumed lifetime is 15 years at 35,000 miles a year).

As an example, CNG buses are low emission equivalent and none of the emission control equipment that diesel buses now require. They have comparable range, perform well in cold weather conditions, similar weight capacity, sizing and seating. 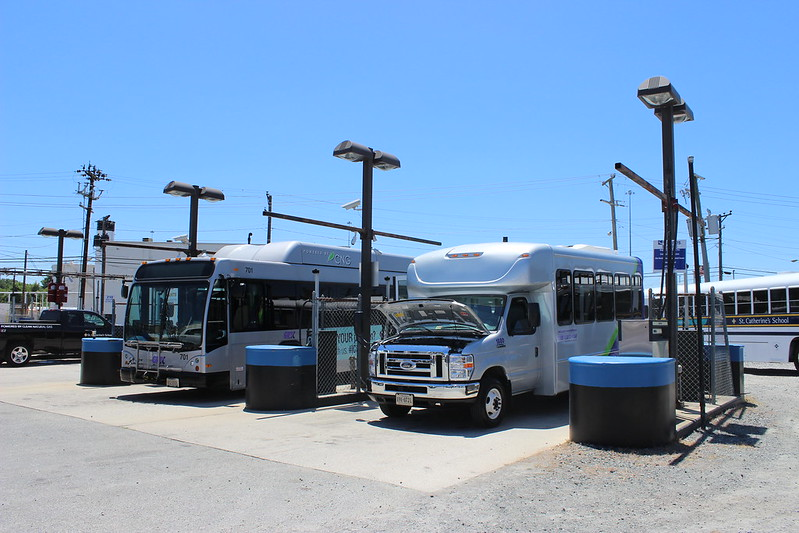 Compressed Natural Gas can also be sourced from renewable energy and is used globally cap landfill, wastewater, and agricultural emissions. When natural gas is renewably sourced it is referred to as Renewable Natural Gas (RNG) or Biomethane when the gas is purified to reduce non-methane components. RNG is a biogas that has been purified to meet pipeline fuel standards. These biogases have great potential as they are often a byproduct of waste and can be sourced from landfills, livestock operations and wastewater treatment plants. When these biogasses are not used in the creation of RNG, they are often flared or off-gassed which releases methane, CO₂ and other greenhouse gasses directly into the atmosphere. Using RNG significantly reduces carbon intensity over diesel.

According to NGVAmerica, RNG can reduce carbon intensity by approximately 50% from landfill and wastewater, 100% from food waste and green waste such as lawn clippings, and 382% from dairy waste sources. As a result, RNG can be a method to replace a highly polluting diesel fuel with a lower-emission energy source that also captures and sequesters methane, the powerful greenhouse gas for reuse in combustion.

In many parts of the country, including Virginia, CNG can also be considered a low-cost alternative fuel. In some regions of the country such as the West Coast, costs can be quite low due to connections to established gas lines. However, this does not apply to regions or some rural areas where there is little CNG infrastructure and costs can be higher than other alternative fuel options. Additionally, once the infrastructure has been installed, the cost of CNG fuel prices are relatively stable compared to diesel.

In conclusion, CNG can be a lower cost and reliable alternative fuel that provides many advantages over traditional diesel vehicles. NGVAmerica presented CNG as a true investment in terms of saving money, reliability and resiliency. As a clean technology used in transit, CNG and RNG helps to reduce harmful emissions in our communities.