Virginia Clean Cites Stakeholders met in Richmond on April 4th for the 4th annual Rally event.  The event began with afternoon vehicle demonstrations in front of Main Street Station showcasing a range of technologies from electric task oriented vehicles, a 100% biodiesel truck, to propane School buses and SUVs and natural gas recycling truck as well as a selection of electric passenger vehicles including Nissan showcasing their updated new manufacturer discount of $3500 for the Nissan Leaf and smaller discount for the longer range leaf. 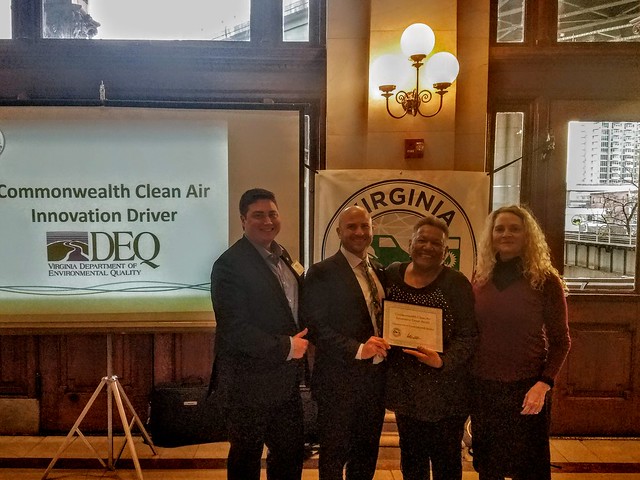 The main show included a keynote address from Mike Lorenz of Sheetz, which detailed that organization’s effort to add high blends of biofuels over 12 years to their traditional petroleum fuel stations, and recent progress into electric vehicle charging partnerships.

This Biofuel Station Partner Award recognizes Sheetz, Inc for their work to build 18 high blend ethanol stations in Virginia, serving E85 and E15 to fuel sites.  As part of the Biofuels Infrastructure Project, Sheetz – Virginia Clean Cities, Sustainable Energy Strategies Incorporated, DMME, and partners in Virginia and Maryland partnered for the deployment of E85 stations in Maryland and Virginia. This successful project increases the availability of this cleaner, renewable fuel to drivers.  And again we appreciate them for their work incorporating numerous electric vehicle partners into their sites.

Given by Susan Susanke of Sustainable Energy Strategies / REG

The EV Innovator award is given to EVgo – Under the McAuliffe administration Virginia Department of Environmental Quality went out for bid for a partner for $14 million in diesel settlement money for statewide network of DC Fast Chargers.  In Summer 2018, Virginia’s Northam administration announced EVgo as that partner. In recognition of the significant EVgo investment into Virginia in the state contract for hundreds of public EV charging stations at sites that will last Virginia Clean Cities extends this award for EV Innovator.

ZEV City of the Year recognizes Roanoke – Municipalities in Virginia are looking at different methods for greening their fleets, while Roanoke was recognized in 2017 as the Diesel Reduction Champion in 2017 for their propane fleet, Virginia Clean Cities extends the ZEV City of the Year appreciates award to Roanoke for being an early city to participate in deployment of a public DC Fast Charger and in their past electric use for parking administration and transition from hybrid vehicles to around 20 Leafs for the city through their used vehicle program.  Today we recognize Roanoke as the ZEV City of The Year.

Award given by Nate Frost of Dominion Energy

Natural Gas Anchor Leader of the Year is given to Frito-Lay.  Clean Cities has National Partners such as UPS, Schwans and Waste Management who work to roll out clean fuel vehicles nationwide.  One major partner, Frito Lay, has worked to adopt clean fuels nationwide and in 2018 served as an anchor fleet, a large customer to facilitate the new Lynchburg Virginia Compressed Natural Gas fueling station. This is a new station in an important area of Virginia and it brings us pride to recognize Frito-Lay with this Natural Gas award for 2018.

Given by Mike Phillips Alliance Autogas

Commonwealth Clean Air Innovation Driver Award is given to the Virginia Department of Environmental Quality – DEQ, has been a leader on the state VW settlement efforts which have included major clean fuels programs announcements in 2018. DEQ has encouraged public participation and input in this important process, accepting public comment through their websites and public hearings. Through their efforts, Virginia, was the first state unveil a program for EV charging, assigning 15% of settlement funds, and Virginia also released a program integrating electric buses into the state public transit programs.

Given By Robin Jones DMME and Ben Delp JMU