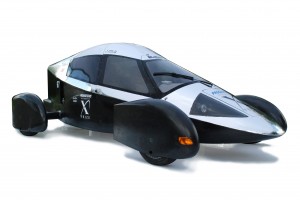 Teams from Virginia, North Carolina and Winterthur, Switzerland, with roots in the world of auto racing have won the first Progressive Insurance Automotive X Prize, the $10 million competition aimed at advancing the technology for more fuel-efficient vehicles.

The competition, which began in 2007 with 136 vehicles from 111 teams, required that the vehicles achieve 100 miles per gallon or the energy equivalent. While two of winning vehicles reached that goal with electric power plants, the top winner did it with an internal combustion engine.

“When you have a background in racing, you focus on what you’re trying to achieve, and you know that you have a given time period to do it,” said Oliver Kuttner, the founder and chief executive of Edison2 of Lynchburg, Va., which won the $5 million top prize with its Edison2 Very Light Car. The company’s fabricators and mechanics have worked for teams participating in auto races like the 24 Hours of Daytona and Indianapolis 500.

The Automotive X Prize is the latest undertaking of the X Prize Foundation of Playa Vista, Calif., which had sponsored the $10 million Ansari Space X Prize that was won in 2004 by Burt Rutan’s Scaled Composites, creators of SpaceShipOne. Other foundation competitions include the Google Lunar X Prize, the Archon Genomics X Prize and the Wendy Schmidt Oil Cleanup X Challenge.

The Automotive X Prize is the contemporary interpretation of the Mobil Economy Runs and other popular fuel-economy contests that ran through the late-1960s. The X Prize was sponsored by the Progressive Group of Insurance Companies. Glenn Renwick, the chief executive of the Progressive Corporatin, said the company came up with the $10 million purse by diverting money from its advertising budget over the last three years. The X Prize also received up to a $5.5 million grant from the federal Energy Department.

The goal of the Automotive X Prize is to spark the development of super-efficient cars that can be manufactured in large volume. “We wanted to incentivize the dreamers and the doers out there to take on an audacious act,” said Peter Diamandis, X Prize Foundation chairman and chief executive. “This was not an easy competition by any means.”

The competition was broken up into two classes: Mainstream, which was for four-seat vehicles, and Alternative, which had two divisions: two-seats side-by-side and two seats in a tandem, fighter-jet configuration.

Edison2 had entered two Very Light Cars in the Mainstream class, and they were the only two remaining cars in that class. While mechanically identical, each of the Very Light Cars recorded different results at the track, which the team attributed to variables like weather conditions.

Sitting on a 100-inch wheelbase, the car has a chassis of welded steel tubing and a body that resembles a small helicopter, but the entire vehicle weighs just 830 pounds. A rear-mounted, single-cylinder motorcycle engine burns a blend of 85 percent ethanol and 15 percent gasoline to make about 40 horsepower.

The two entries were driven by Emanuele Pirro, five-time winner of the 24 Hours of Le Mans, and Brad Jaeger, a Vanderbilt University engineering graduate and veteran of the Firestone Indy Lights series.

The winners will be officially announced this morning at the Historical Society of Washington D.C.