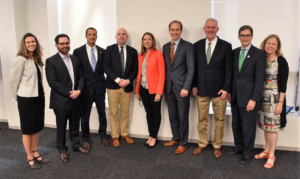 The Commonwealth of Virginia on September 12th became the 13th U.S. jurisdiction to join the Transportation and Climate Initiative (TCI). In a letter to the Georgetown Climate Center, which facilitates TCI on behalf of the participating state agencies, Virginia Natural Resources Secretary Matthew Strickler announced that Virginia will work with TCI toward regional low-carbon transportation solutions.

“Virginia is fully committed to TCI’s founding principles and shared values,” Secretary Strickler stated in the letter, which was also signed by Virginia’s Secretary of Transportation Shannon Valentine and Secretary of Commerce & Trade Brian Ball.

“We support the efforts of TCI member states to explore policy approaches to create a regional low-carbon transportation system to meet today’s and tomorrow’s challenges,” Secretary Strickler continued. “Virginia has closely followed the public conversation that TCI initiated to explore those approaches and gain input on strategies. We agree that a regional solution that reflects the regional nature of the transportation system will be more beneficial to residents and businesses, and we look forward to participating in the development of those solutions.”

“We are delighted to welcome Virginia to the roster of jurisdictions that are taking real leadership toward lasting solutions to climate change,” said Vicki Arroyo, executive director of the Georgetown Climate Center. “Transportation is the largest source of greenhouse gas emissions in the region, and TCI states have recognized that it will take regional collaboration to address the challenge. Virginia’s commitment will add even greater momentum to the push for a lower carbon transportation future in the Northeast and Mid-Atlantic region.”

The Transportation and Climate Initiative (TCI) is a regional collaboration of Northeast and Mid-Atlantic states and the District of Columbia that seeks to improve transportation, develop the clean energy economy and reduce carbon emissions from the transportation sector. In addition to Virginia, the current TCI member jurisdictions are Connecticut, Delaware, the District of Columbia, Maine, Maryland, Massachusetts, New Hampshire, New Jersey, New York, Pennsylvania, Rhode Island and Vermont.

Participating states recognize that the region faces serious environmental and transportation challenges that can best be addressed by tapping into America’s greatest strengths, including a skilled workforce, innovation, public-private partnerships, and the power of markets. Since 2015, states have been exploring policy approaches to create the clean transportation system that the region needs to meet today’s and tomorrow’s challenges.

The Georgetown Climate Center serves as the facilitator of the Transportation and Climate Initiative.

On September 12th, Governor Ralph Northam announced a series of actions to help Virginia better address the impacts of carbon pollution from fossil fuels. Governor Northam has directed the Virginia Department of Environmental Quality to identify ways to improve environmental protection in the Commonwealth.

As the leaders of U.S. states and other countries gathered at the Global Climate Action Summit in San Francisco this week to work on climate solutions, Virginia committed to:

More than one third of all carbon pollution comes from transportation. In Virginia, transportation is the largest contributor of greenhouse gasses, in addition to being a large source of nitrogen oxides and ozone pollution, which directly impact public health.

Virginia is already working with this group of states as we prepare to join the Regional Greenhouse Gas Initiative (RGGI), and this effort will extend our collaboration from electric generation to transportation. TCI is a forum for exchanging ideas, sharing best management practices, and collaborating on initiatives to reduce transportation’s carbon footprint.